The Lower Gauley: Why We Love Her 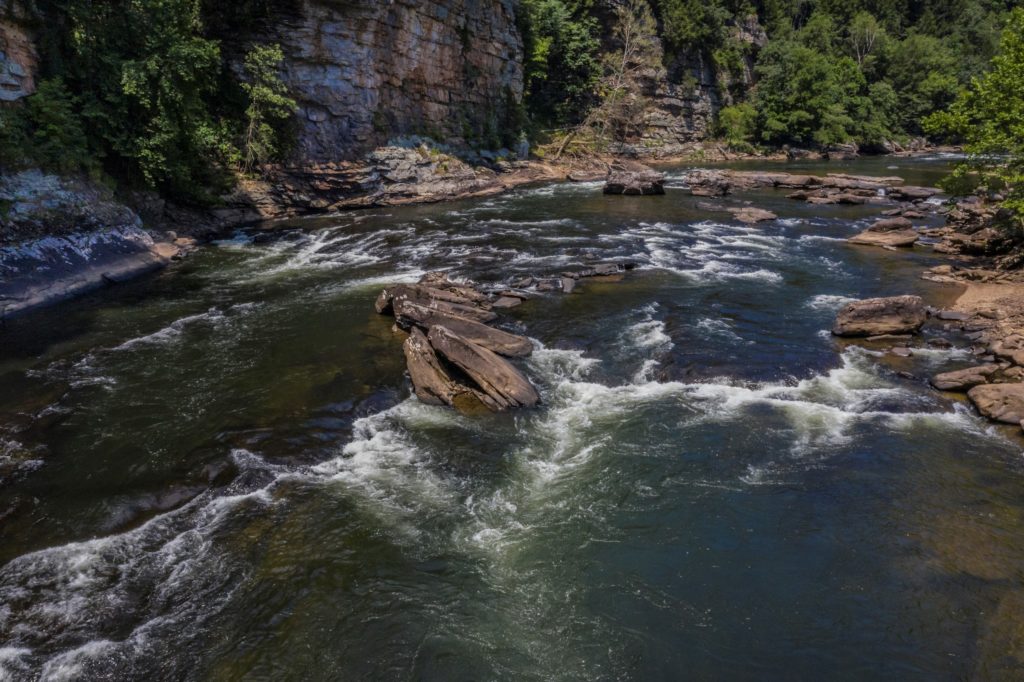 The little sister of the world-famous Upper Gauley doesn’t get enough love and respect. Here’s why that is, why it deserves your attention, and why you should consider running it, even if you’ve already done the Upper.

“The Beast of the East.” “The Big 5.” And, “the best 10 seconds in American whitewater.” These are all phrases you may have heard used to describe the Gauley River or individual rapids on it. In fact, if you’ve ever seen a list of the top-5 whitewater rafting rivers in the world, the Gauley is on it. But, what they’re really talking about is the Upper Gauley—the ten miles of river immediately below Summersville Dam.

Maybe you didn’t know this, but downstream of the Upper Gauley, there are 14 more miles of rapid-rich river just sitting there, lonely, wondering where you are and why you aren’t running it.

“If you really look at the rapids down there,” says multi-decade raft guide for Adventures on the Gorge, Randy Underwood, “and you look at the size of those waves and holes, and compare them to the Upper Gauley, they’re on par.” Actually, four of the six biggest wave hits on the entire Gauley River are on the Lower. One of them, the fifth wave in a Class-V rapid called Lower Mash is quite possibly the biggest single wall of water that any rafter will purposefully run into on a standard Gauley Season day. “Just because they’re a little easier to get into and get out of,” Underwood continues, “that’s what makes the Lower Gauley not quite as intense as the Upper.”

Ask any experienced Gauley rafter which section is more scenic, and most won’t hesitate to name the Lower. “Incredible rock lines, incredible cliff lines, and the mountains—it’s a totally different feel than the New River,” says AOTG CEO, Roger Wilson, who himself also guided the Gauley for decades. “The canyon’s a little more narrow. There are some nice cliff walls that run probably 150 foot straight up the out of the river, straight up the mountain.” He’s talking about Koontz’s Bend, a section of the Lower Gauley that is home to the incomparable Canyon Doors Rapid. Our Lower Gauley lunch site and Deluxe Overnight camp are right there in the middle of it.

“We have been going to the New River Gorge for over twenty years for our father son weekend getaways. We’ve enjoyed the rafting, bridge tour, rappelling, paintball, zip lines, as well as the amazing accommodations and of course the food at Smokey’s! AOTG nails it year after year! ” – The Gambino Tribe

“The Gauley is my escape. A place without cellphones, without connectivity, where it’s just me and the water and the friends in my boat. I haven’t missed a season, and I will still make it down during these COVID times because it recharges my soul and challenges me to bring my best every day. ” – Diana Clarkson

“Guiding the Lower Gauley was just a beautiful way of traveling the world,” says Wilson, “but not leaving West Virginia.”

“The biggest distractor for the Lower Gauley?” Asks Wilson. “It happens to be connected to the Upper Gauley.” And in pointing out this simple accident of geography, he pegs the only reason why, on a typical Gauley Season day, AOTG will host hundreds on the Upper Gauley and maybe tens on the Lower. Less crowded? Add it to the list of the Lower Gauley’s attributes.

AOTG operations manager Chris Hayes takes it a step further. “If it wasn’t for the Upper Gauley, the Lower Gauley would be the premier section of whitewater in West Virginia…and probably the Appalachians.”

Have you run the Lower Gauley? Do you want to?